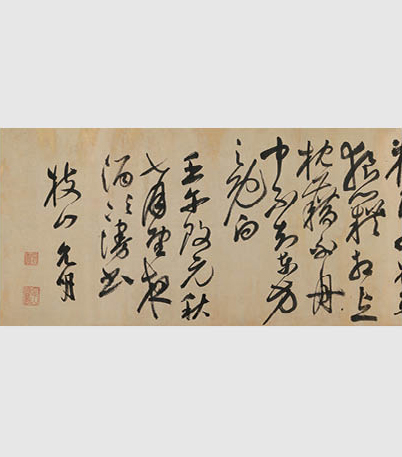 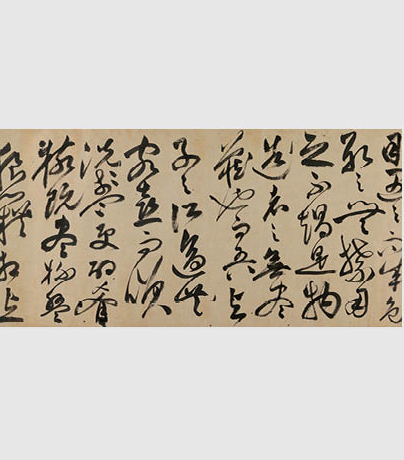 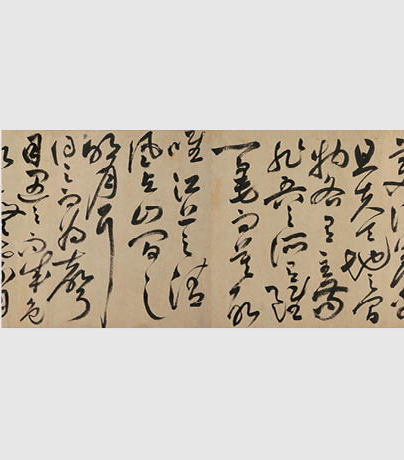 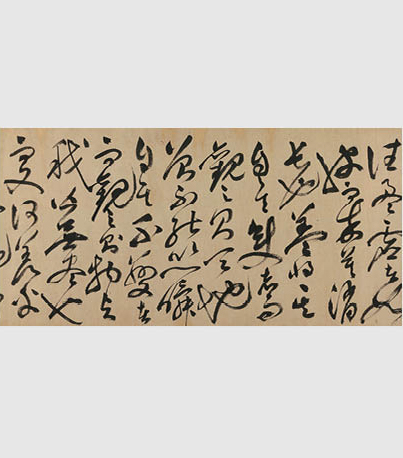 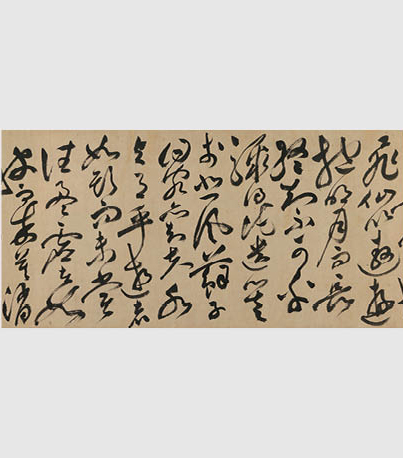 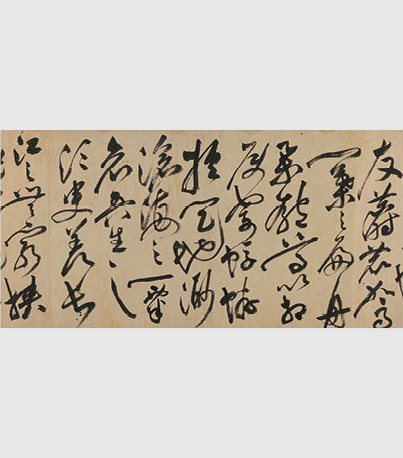 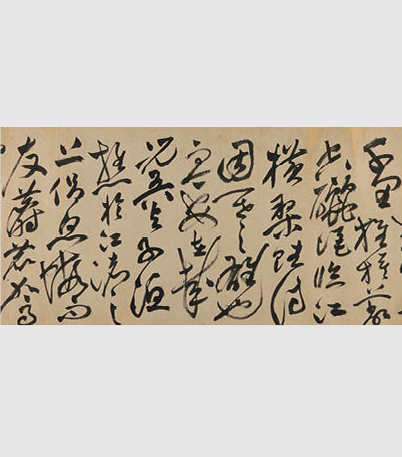 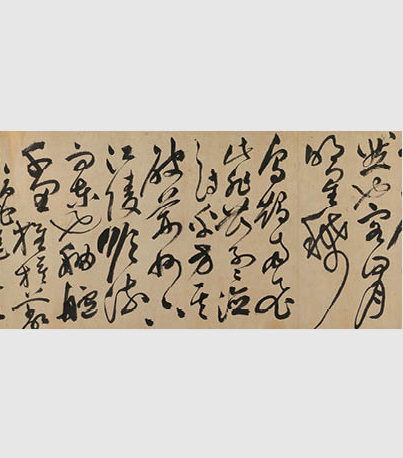 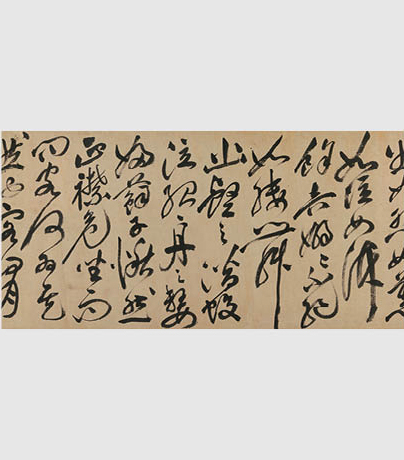 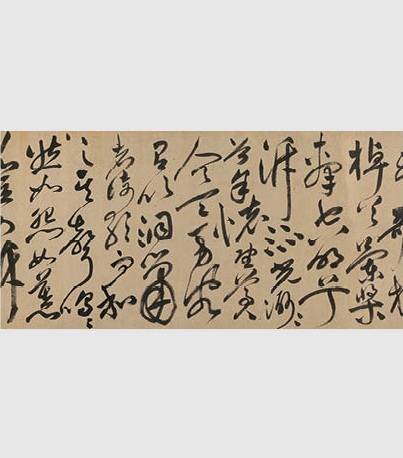 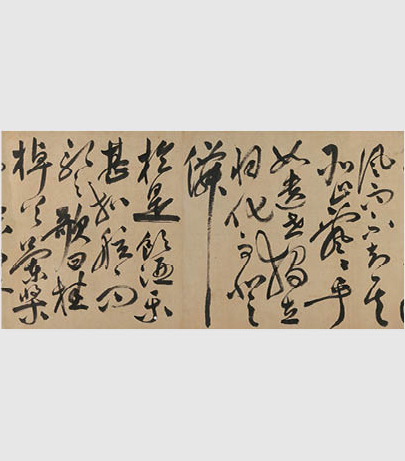 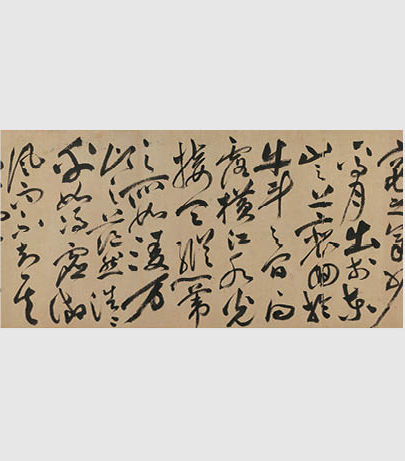 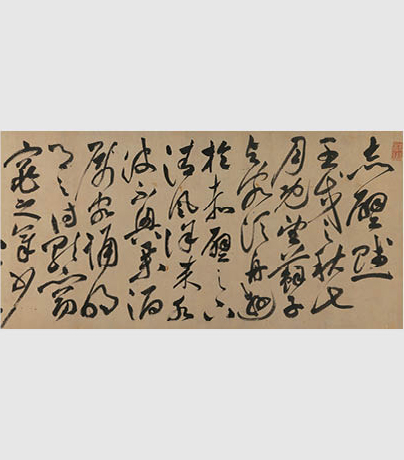 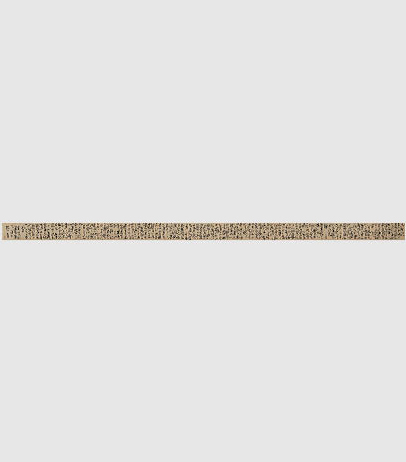 Looked at the night sky in autumn July in Renwu Year when the reign title was changed, and finished the writing while drinking wine. Zhishan Yunming.

Zhu Yunming (1460—1526), courtesy name  Xizhe, literary name Zhishan, native of Changzhou (today’s Suzhou, Jiangsu Province). He was born with an extra thumb (“zhizhi” in Chinese pinyin), so he named himself “Zhizhisheng” (man with an extra thumb), widely known as “Zhu Jingzhao” (祝京兆). In the 5th year in Hongzhi’s reign (1492), he was conferred Magistrate in Xingning County, Guangdong Province, and later Local Magistrate in Capital Responsive to Heaven (“Yingtian Fu” in Chinese pinyin). He was a poet, artist, and most importantly a calligrapher. He learned from previous calligraphers including Zhong Yao, Wang Xizhi, Wang Xianzhi, Zhi Yong, Yu Shinan, Zhang Xu, Huai Su, Su Shi, Mi Fu, Zhao Mengfu, etc., and thus delivered miscellaneous handwritings of diversified styles. His regular script in small characters and cursive script are mostly admired. Xu Zhenqing, Tang Yin, Wen Zhengming and Zhu Yunming are together known as “Four Masters in Wuzhong (today’s Suzhou)”. He was the author of Records of Early Ming Dynasty, Unofficial History of Nine Dynasties and Huaixing Tang Collections. His biography was included in History of Ming Dynasty.

Among all calligraphers from Wumen Calligraphy School, Zhu Yunming reign supreme. Wang Shizhen in Ming Dynasty said in Fragmented Words of Art, “Calligraphers from Wuzhong are world-renowned, among whom Jingzhao, or Yunming enjoys the highest reputation”. Zhu Yunming was best at cursive scripts among all writings he was adept at. Huang Mianzhi, a contemporary poet from Wuzhong once wrote, “Zhishan’s cursive writing is unparalleled not only in Wuzhong, but also in the world”. Zhu’s works are frequently appreciated and discussed, especially his long and large-size calligraphy scrolls, extensive, bold and vigorous.

Zhu Yunming preferred writing cursive script in his late years, which was rarely seen in the early-to-mid period. The Former Red Cliff Ode by Su Shi in Cursive Script was one of his masterpieces in his late years. The style of this calligraphy work is similar to that of Zhang Xu and Huai Su, but the basic techniques including the brushwork, stippling and structure of characters all reflect a combination of various calligraphy schools since Wang Xizhi and Wang Xianzhi; Zhu’s cursive script is mostly influenced by Huang Tingjian, in which the horizontal strokes are full of twists and turns. This calligraphy work is quite free in style and varied in character forms; while the strokes are unrestrained, most characters are independent instead of being connected with one another, i.e. the so-called “writing cursive script with also a spirit of writing regular script”. Shifts from character to character are distinct even though most strokes are wild, focusing on the link of spirit and natural connection between characters throughout the script, which is well-proportioned and well-structured, but quite free and unrestrained with no clue to find.

Su Shi’s Former and Latter Red Cliff Odes have been favored by calligraphers in all ages, and Zhu Yunming is no exception. From his works, we know that he wrote down the Red Cliff Odes in regular script in small characters, running script, cursive script, etc. There are multiple cursive versions. For instance, there is the 10m long Former and Latter Red Cliff Odes written by 43-year-old Zhu Yunming on Jinsushan scripture paper now displayed in Shanghai Museum. A comparison between these two works finished at different times indicates that Zhu’s later works convey a more bold style by referring to Huang Tingjian’s cursive writing with long strokes interspersing. Coherence can be seen from the form of individual characters to organization of blocks of several characters, arrangement of lines and the overall layout, conveying an untrammelled feeling and giving an astonishing visual impact.

Zhu Yunming’s The Former Red Cliff Ode by Su Shi in Cursive Script was finished in the first year in Jiajing’s reign (1522), when he was 63 years old, and thus this work was done in his late years. In the 1980s, it was identified as a National First-Class Collection by calligraphy and painting appraisal seven-member group under the State Council, now displayed in Tsinghua University Art Museum.