A Farewell Ode in Running Script 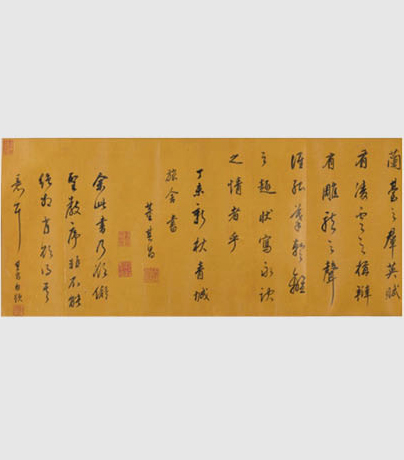 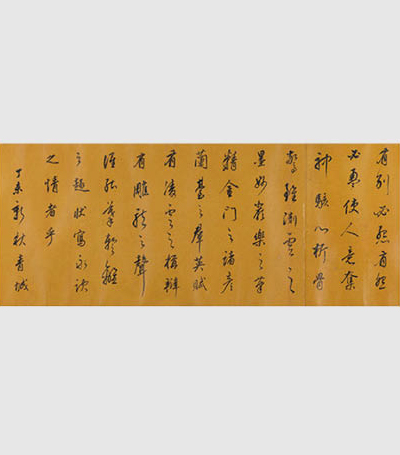 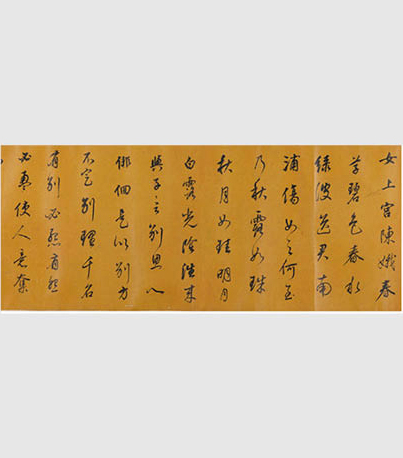 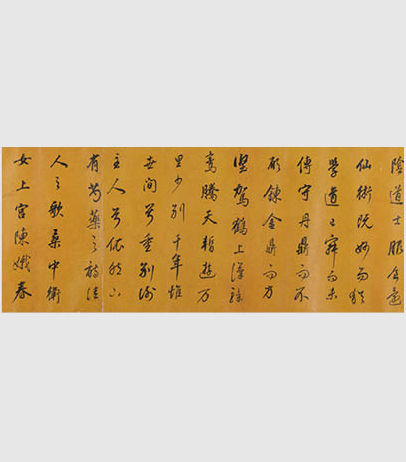 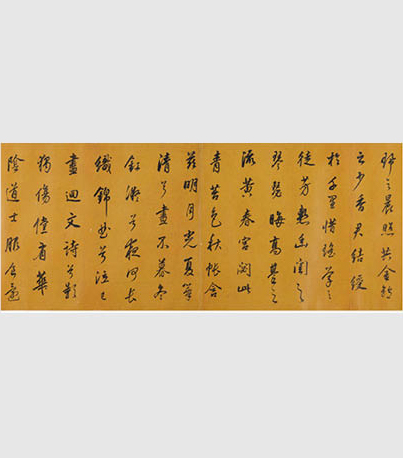 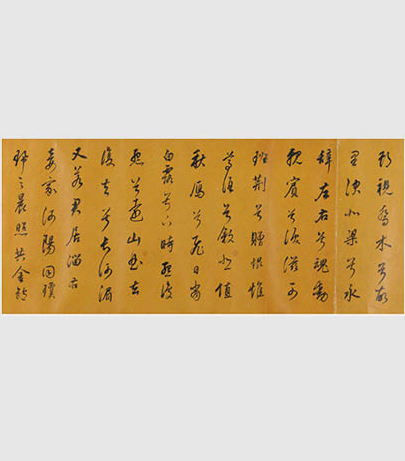 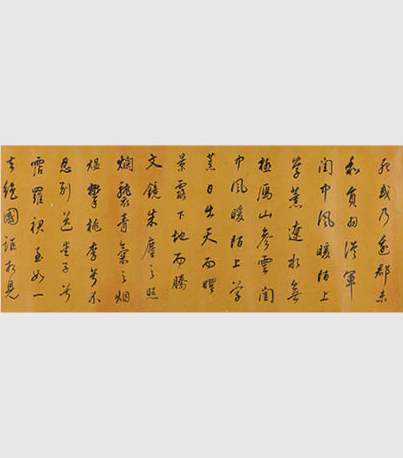 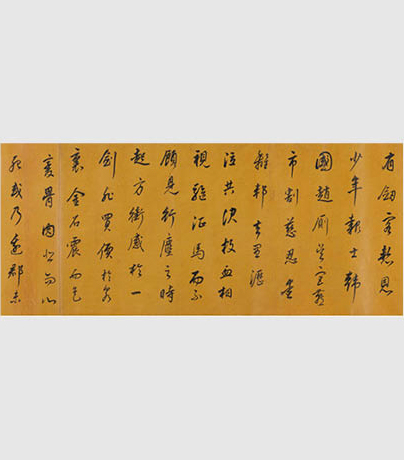 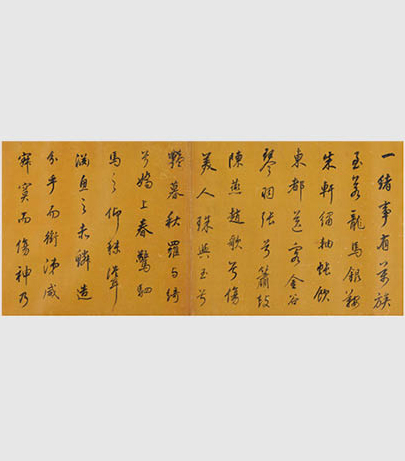 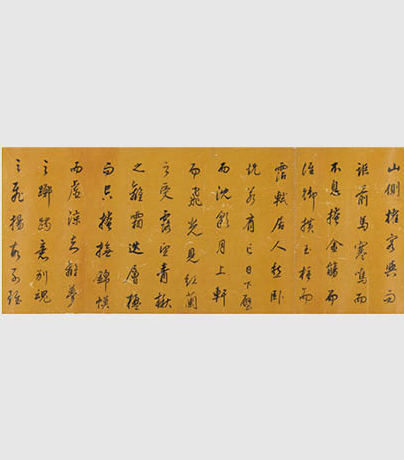 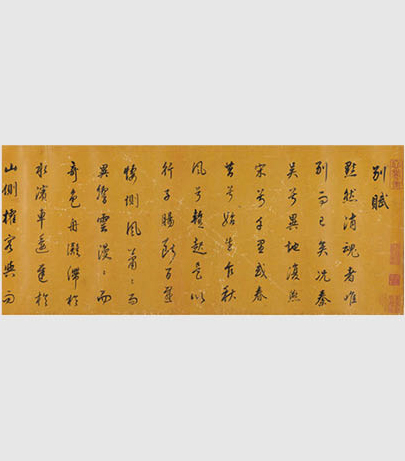 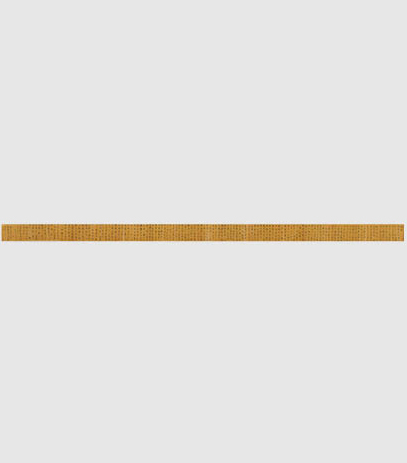 Written by Dong Qichang, in a hostel in Qingcheng, in early autumn of Dingwei Year

This calligraphy work is to model Preface of Holy Doctrines and convey as much as possible its spirit, if it cannot fully resemble the great work. Inscribed by Qichang, the artist himself.

Dong Qichang (1555—1636), courtesy name  Xuanzai, literary name Sibai or Xiangguang Jushi, native of Huating (currently Songjiang in Shanghai). In the 17th year of Wanli’s reign, he became Jinshi (a degree offered by imperial examination) and was commissioned to be compiler in Hanlin Academy. Later he was promoted to be Director of the Board of Rites in Nanjing, and his posthumous title was “Wenmin”. Qichang was adept at landscape painting, firstly learning from Dong Yuan in the Southern Tang Dynasty, Ju Ran in the Northern Song Dynasty, Mi Fu in the Northern Song Dynasty and his son Mi Youren in the Southern Song Dynasty (together Dongjuermi, 董巨二米), and then from Ni Zan and Huang Gongwang in Yuan Dynasty. He proposed the Theory of South and North Sects by comparing painting theories to Zen Buddhism, and praised the South sect to be orthodox, which exerted a great impact on the painting arena. In calligraphy, he drew merits from Yan Zhenqing and Yu Shinan in Tang Dynasty, then dated back to Zhong Yao in the Three Kingdoms Period and Wang Xizhi in the Eastern Jin Dynasty, and also referred to the brushwork of Li Yong, Xu Hao and Yang Ningshi in Tang Dynasty. Twenty years later, he started to learn from calligraphers in Song Dynasty, and to consult Zhao Mengfu’s works. Dong was an important calligrapher in late Ming Dynasty, who conducted a comprehensive study of models of calligraphy in preceding dynasties. His handwriting is praised as Dong Ti (the calligraphic style of Dong Qichang, 董体), having an impact for as long as 200 years in Qing Dynasty. He was the author of Essay of Huachan Study and Rongtai Collection. His biography was included in History of Ming.

A Farewell Ode in Running Script

Dong Qichang was deeply rooted in calligraphy works of literati represented by Wang Xizhi and Wang Xianzhi. He saw a large number of ancient authentic works while appreciating, and got the opportunity to imitate, thus learning from various styles and getting inspired. He imitated famous calligraphers in Jin, Tang, Song and Yuan Dynasties, benefiting from a comprehensive study of different calligraphy styles. Particularly, he tried to reflect the predecessors’ interest and charm in his own work without rigidly adhering to the formats in their works. Here his A Farewell Ode in Running Script was finished when Dong Qichang was travelling in Qingcheng, and was also a work representing his style of learning from the predecessors without being restrained by conventions. The technique of writing in Preface of Holy Doctrines is applied throughout this farewell ode, while Wei and Jin Dynasties’ style cannot be seen here, but elegance and simplicity.

A Farewell Ode was a well-known lyric created by the litterateur Jiang Yan in the Southern Dynasties. The very first line—“The thing that overwhelms me with grief is to say goodbye”— directly reflects the theme and sets a sorrowful and lyric tone for the rest of the ode. Through the description of different partings, the author expressed the pain that one must bear while bidding farewell to his beloved ones. Dong Qichang loved writing down songs and odes in the Southern Dynasties. Apart from A Farewell Ode, he also wrote down Ode to Snow, Ode to the Moon, Ode to Crane Dance, etc., among which Ode to Snow was now treasured in Metropolitan Museum of Art, New York. It was a running script calligraphy work excerpting the famous Ode to Snow by Xie Huilian, a litterateur in the Southern Dynasties.

From the inscriptions, we know that this A Farewell Ode in Running Script was finished in the 35th year of Wanli’s reign (1607) by 53-year-old Dong Qichang. In the 1980s, it was identified as a National Second-Class Collection by calligraphy and painting appraisal seven-member group under the State Council, now displayed in Tsinghua University Art Museum.
Share