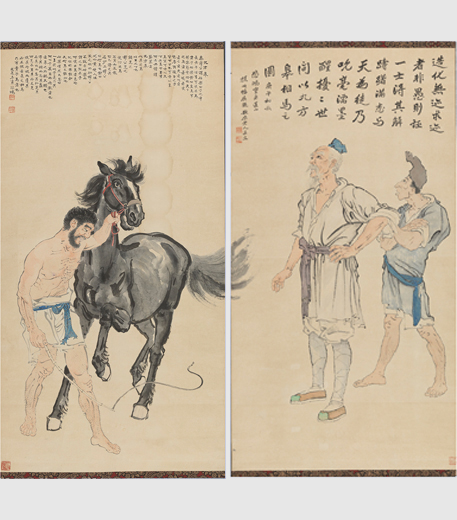 Painted in winter, Wuchen Year (the 5th year in a cycle of Heavenly Stems and Earthly Branches of Chinese Calendar) by Beihong.

Inscriptions: Nature has no traces, and the one who tracks the traces is either slow-witted or accused falsely. A man who figures this out is complacent to appreciate himself to be in the same class with nature, and prepares ink and brushes to awaken and amaze the world, by drawing Jiufang Gao judging horses. In the early autumn in Gengwu Year (the 7th year in a cycle of Heavenly Stems and Earthly Branches of Chinese Calendar), Beihong is back in Kuangshan, asking Chen Sanli, literary name Sanyuan, to inscribe his signature on the painting.

Jiufang Gao. Duke Mu of Qin (the fourteenth ruler of the Zhou Dynasty State of Qin) said to Bo Le (a horse tamer in Spring and Autumn period), “You’re getting old. Could you send one of your sons and nephews to look for good horses?” “Generally you can tell a horse is good from its appearance, muscles and bones; identifying uncommonly good horses can be quite confusing though, and one cannot be sure whether they exist or not. They run as quickly as lightning without any dust raised or any footprint left. My sons and nephews are not qualified enough to be imparted with the way to identify these excellent horses. I know a man called Jiufang Gao. He used to carry loads and collect firewood with me. And he can observe and identify the uncommonly good horses, just as perfectly as I do, or even better.” said Bo Le. Duke Mu met with Jiufang Gao and then sent him to find a good horse. Three months later, Jiufang Gao came back and said, “I found a good horse in Shaqiu.” Duke Mu asked, “What kind of horse?” Jiufang Gao answered, “A yellow female horse.” Duke Mu asked someone to fetch the horse, but it turned out to be a black male horse. Duke Mu was not happy and summoned Bo Le,“The man you recommended can not even tell a horse’s gender and color. How do you expect him to tell whether a horse is good or not?” Bo Le sighed deeply and said, “Jiufang Gao is so wise in judging horse already? This is why I say he is far better than me in judging horse. Jiufang Gao is judging a horse’s intrinsic quality, appreciating its ingeniousness rather than vulgarness, remembering its inner world rather than its appearance. Jiufang Gao only sees what needs to be seen and neglects what does not; he only inspects what needs to be inspected and ignores what does not. A horse judger like Jiufang Gao is worth significantly more than mere horse judging.” Painted in the winter of Wuchen Year by Beihong.

Xu Beihong (1895-1953), original name Xu Shoukang, native of Qiting, Yixing, Jiangsu Province. He is a Chinese contemporary painter and art educator. He once studied Western painting in France, and engaged in art education after returning to China, successively teaching in Art Department in National Central University, School of Art in Beiping University and National Art School in Beiping. He took up the post of Principal of China Central Academy of Fine Arts after 1949. Xu was adept at painting persons, animals, flowers and birds. He promoted realism; in the light of traditionalism, he highly praised Ren Bonian’s works, emphasizing reforming Chinese painting and integrating it with Western painting elements. He paid attention to lighting and forms, as well as precisely mastering the anatomical structure and bones of the objects. He also highlighted the connotation of his works, and thus having a great impact on China’s art arena. He was primarily known by the entire world for his Chinese ink paintings of running horses.

This is a set of ink and color paintings on paper, created by Xu Beihong based on the legendary story of Jiufang Gao judging horses. As one could see from the picture with full composition, both the shirtless strong man and the black-hair horse are full of artistic tension; standing beside, Jiufang Gao, the elderly man with white hair and beard, has an eye contact with the horse, which made the painting even more expressive. Jiufang Gao puts one hand on his hip, lifts his head, looking ahead, eagle-eyed; the black horse raises its fore hooves, seeming to be shouting, looking back at Jiufang Gao as a bosom friend. All horses depicted by Xu Beihong are horses of freedom and uninhibitedness, except the one in this painting, which is tied by a red bridle. Concerning this issue, Xu Beihong gave his explanation, “Horses are like humans. They are willing to serve those who know them well, instead of being tamed by the fatuous”. On the left side of the painting, there is power and tension expressed by the strong man and the horse, while Jiufang Gao and the attendant on the right represent a kind of confidence and thirst for talents. This comparison between tension and relaxation demonstrates the artist’s outstanding realistic and expressive painting skills.

The earliest inscription of this painting was done in the winter of Wuchen Year (1928), whereas the other Jiufang Gao painted by Xu treasured in the National Art Museum of China was finished at the end of 1931. Therefore, this ink and wash painting is probably part of the rough sketch of the larger work Jiufang Gao. Both were created in difficult times of the Chinese nation, when the Japanese militarism maliciously trampled upon the land of our country and we needed various talents to save the country. Xu hoped to caution the country and the people with his work Jiufang Gao. In addition, from the inscription “early autumn in Gengwu Year”, it could be known that in the early autumn in 1931, Xu went to Kuangshan visiting 79-year-old Chen Sanyuan, the famous patriotic Chinese poet. Chen wrote inscriptions for the work, hoping “to awaken and amaze the world” with Jiufang Gao’s story. Xu put Chen Shiceng’s (Sanyuan’s son) seal of “Yuba buneng zhigong (carved in relief)” on the lower right corner of the painting to showcase Chen’s family’s impact on and support to his art creation. Xu once mentioned the following in an essay, “Nature has no traces, and the one who tracks the traces is either slow-witted or accused falsely. A man who figures this out is complacent to appreciate himself to be in the same class with nature, and prepares ink and brushes to awaken and amaze the world, by drawing Jiufang Gao judging horses”. This further explicates the profound meaning of his work. Therefore, this draft finished before Jiufang Gao, the large set of painting, proves to be a valuable source for studying Xu Beihong’s artistic ideology.

Jiufang Gao by Xu Beihong was in the 1980s identified as a National Second-Class Collection by calligraphy and painting appraisal seven-member group under the State Council, now displayed in Tsinghua University Art Museum.