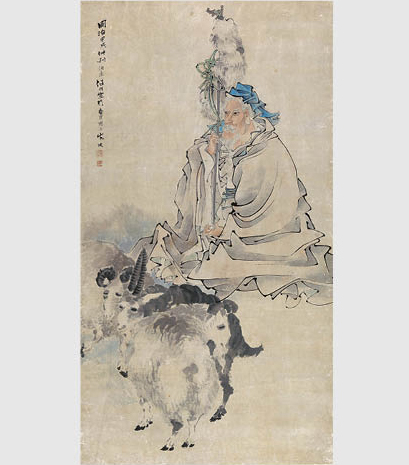 Ren Yi (1840—1896), courtesy name Bonian, literary name Xiaolou, native of Shanyin (today’s Shaoxing in Zhejiang Province). His father Ren Hesheng was a folk painter. Ren Bonian learned painting from his family members; he admired Ren Xiong’s work, but he learned painting from Ren Xun. He engaged himself in a wide variety of genres ranging from figure and landscape to bird-and-flower paintings. “He got well-known already when he was still very young.” Later Ren settled in Shanghai and sold paintings for a living, becoming one of the representative Shanghai School painters.

From the inscription “Jiaxu Year in Tongzhi’s reign”, it is seen that this painting was finished in 1874, when Ren Bonian was 35 years old, living in Shanghai. In the painting Su Wu is sitting on the ground, greying at the temples, gazing far into the distance. Three sheep to the fore are shivering out of cold, curling up together to warm themselves. The snuggling sheep are to tell people that it is freezing cold, while Su Wu holding the scepter is looking ahead steadfastly with his body stretched, showing no fear at all of the bitter cold. The painting is inscribed with “Jiaxu Year in Tongzhi’s reign, painted by Ren Yi (Bonian) by Chunshenpu” and the seals are “Ren Bonian” carved in relief and “Ren Yi siyin” carved in intaglio. The face of the figure in the painting is contoured with fine lines, and his hood and clothes are outlined powerfully combining nail-head rat-tail drawing (钉头鼠尾描) and bent-reed drawing (折芦描) techniques, and conveying a sense of exquisite decoration.

In his Xiao Yangqiu, Zheng Yimei wrote that “Ren Bonian imitated painters in the Northern Song Dynasty in figure and flower paintings, outlining in dry ink with strong colors, which is very similar to the style of Laolian. Later he got Bada Shanren’s (Zhu Da) painting album, from which he further learned the quintessence of painting. As for extremely detailed parts, he always raised his wrist and applied the center tip principle in calligraphy; Ren himself said, ‘a painter like Ren Yi is similar to a calligrapher’”.

Su Wu’s national spirit and patriotism have been all along widely eulogized, and a beloved subject for painters from generation to generation. Ren Bonian created a number of equivalent theme paintings. In the 1980s, Su Wu The Shepherd by Ren Yi was identified as a National Third-Class Collection by calligraphy and painting appraisal seven-member group under the State Council, now displayed in Tsinghua University Art Museum.