Portrait of Peonies and Rooster 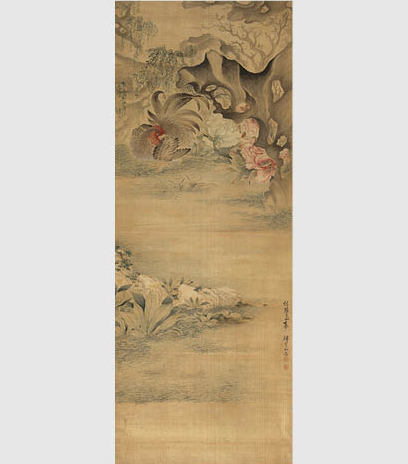 Gao Fenghan (1683-1749), the eleventh generation of the second branch of Gao’s family in Daxing Village, Jiaozhou, was one of Eight Eccentrics of Yangzhou (a group of eight Chinese painters known in Qing Dynasty for rejecting the orthodox ideas about painting in favor of a style deemed expressive and individualist). He is a painter, calligrapher and engraver in Qing Dynasty. He was also called Han, courtesy name Xiyuan, literary name Nancun, Nanfu, Yunfu, Yindi, Yinshi, Yinbing, etc., over 40 in total. Later he started to write and paint with his left hand due to illness, and thus was named Shangzuosheng (the left-hander). He was a Han born in Sanlihe Village, Sanlihe Sub-District Office, Jiaozhou, Shandong Province. In the early period of Yongzheng’s reign, Gao was recommended to be County Magistrate in She County and then in Xizhi County, after which he returned to hometown. While being bold and generous, he was mastery of art, especially landscape and bird-and-flower paintings as well as poetry writing. He was fond of ink stones and had a collection of up to thousands of ink stones, all of which are engraved with his own inscriptions. He was also the author of History of Ink Stones and Collections of Nanfu.

Portrait of Peonies and Rooster by Gao Fenghan

This is a meticulous bird-and-flower painting on silk painted by Gao Fenghan, one of the Eight Eccentrics of Yangzhou in Qing Dynasty, with the inscriptions going as the following: “Imitating Lu Baoshan’s version. Guiyun Monk”, from which it is known that this painting is an imitation of that of Lu Zhi (courtesy name Baoshan), the renowned bird-and-flower painter in early Ming Dynasty. People see Lu’s work as inheriting the merits from Xu Xi and Huang Quan, with simple but beautiful colors as well as meticulous and exquisite lines. The red-comb rooster, red and white peonies, rugged Taihu Lake stones as well as budding trees and willow branches are all in the upper half of the painting, making the layout quite compact but fairly ordered. The rooster and stones are both outlined and well rendered with ink brush strokes. The plumes are quite highlighted with the rooster’s stomach partly inked and partly whitened to make the plumes look textured and the rooster more valiant; nearby stones are of bright and mild ink color, looking transparent, simple, slim and crinkled, which is also a good demonstration of the artist’s exquisite fine brushwork technique. Peonies of red and white colors are well-proportioned: the red peony petals are dyed in rouge, with gamboge color to embellish the darker parts and white color to paint the brighter side of the petals, while the while peonies are outlined and rendered in light ink color, to showcase the stereoscopic effect. Closer, the miscellaneous stones, grass and green moss are very succinctly drawn, reflecting the simplicity and temperament of Lu’s work as well as an impact from Baoshan’s painting.

Gao Fenghan was not only an expert in poetry and seal cutting, but also in painting, especially in bird-and-flower painting. As the inscriptions of this painting indicate, he paid great attention to “learning from the predecessors”, drawing merits from masters including Qingteng (Xu Wei), Baiyang (Chen Chun) and Lu Zhi; from Gao’s experience, it is known that he spent a long time living in Yangzhou and Suzhou, built a deep friendship with Jin Nong, Zheng Xie, Li Shan and Gao Xiang and had frequent exchanges with them in poetry writing, calligraphy and painting. Gao had been an official for more than a decade and been framed and put into prison for several times until he suffered a broken arm, resigned from the official post and started selling his paintings for life. Thanks to all of his suffering, his artistic works had been upright, endearing and positive.

Portrait of Peonies and Rooster by Gao Fenghan was in 1980s identified as a National Second-Class Collection by national calligraphy and painting appraisal seven-member group under the State Council, now displayed in Tsinghua University Art Museum.