Portrait of Green Hills and Maples 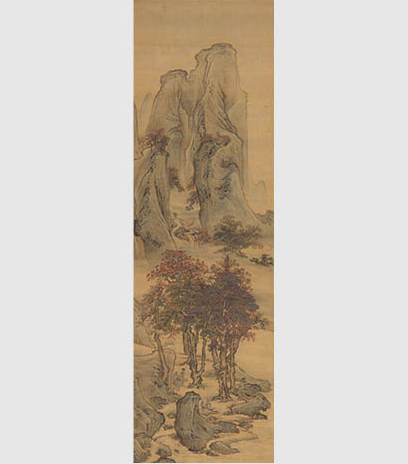 Yuan Jiang (birth and death year unknown), courtesy name Wentao, native of Yangzhou, Jiangsu Province. He was adept at landscape painting, pavilion boundary drawing and bird-and-flower painting as well. In his early years, he used to regard Qiu Ying as his model in painting; later he started to learn from various painters in Song and Yuan Dynasties. His boundary drawing, based on involving his predecessors’ techniques, highlights the vitality of people’s life. His works feature neat fine brushwork, gorgeous colors and overall a splendid style. In the Yongzheng period, he was promoted to be Zhihou (an official position in ancient dynasties). He was an outstanding painter in Qing Dynasty.

Portrait of Green Hills and Maples by Yuan Jiang

This is a landscape painting on silk, depicting beautiful autumn scenery amid the hills, completed by Yuan Jiang in Qing Dynasty. There is a maple forest to the fore in the painting, with showy maple leaves looking brilliant and charming; under the trees there are a few friends, either sitting against the rocks talking and laughing, or writing poems in high spirits on the rocks, with boy servants aside making tea, which all together constitute this painting of a group of men of letters going outing in the mountains in autumn. In the lower left corner, the slopes and rocks are outlined with light ink, textured and dyed as well, creating a great three-dimensional sense. Similarly, the hills in the distance are drawn in a way of mimicking Guo Xi’s and Li Cheng’s (in Song Dynasty) painting techniques, properly building a sense of space that immediately reminds people of real landscapes. The main peak is like a screen; a waterfall plunges down between the valleys and forms a stream down the hills; certain parts are “left blank”, which is typically for landscape paintings, highlighting the mist and floating clouds in the mountains, a situation where nihility and reality unite. The woodcutter carrying faggots is walking along the stream at the foot of the mountain, and this simply adds some more pleasure of life to the painting. The rigorous composition of the picture focuses on the relationship between the nihility and the reality; the scenery is carefully observed and subtly depicted; the overall painting is in bluish green and light crimson and occasionally in bright vermilion, to foil the quietness and brightness of the mountains in autumn, which are full of variations in layers and colors.

Yuan Jiang practiced in Yangzhou during Kang-Qian Flourishing Age. Scholars point out that some literatures say he used to be artist in the imperial palace, probably because his works are typically in bright and showy colors, in large size, and featuring careful and fine lines depicting magnificent architectural complex, similar to the “imperial-court painting style”; however, this is inconsistent with the facts. At that time, Yangzhou was well-developed, gathering a number of rich merchants, where constructing gardens and parks prevailed. Yuan Jiang’s painting style, featuring solid realistic depicting skills, meticulous strokes, bright colors and ornamental elements, differed significantly with other artists during the same period, so he was qualified to paint for these gardens and parks. Along with his son (nephew) Yuan Yao, Yuan Jiang was well-renowned in landscape and pavilion boundary paintings.

Portrait of Green Hills and Maples by Yuan Jiang is properly arranged with reasonable combination of nihility and reality, sparsity and density as well as convergence and divergence. It was in the 1980s identified as a National Second-Class Collection by calligraphy and painting appraisal seven-member group under the State Council, now displayed in Tsinghua University Art Museum.
Share