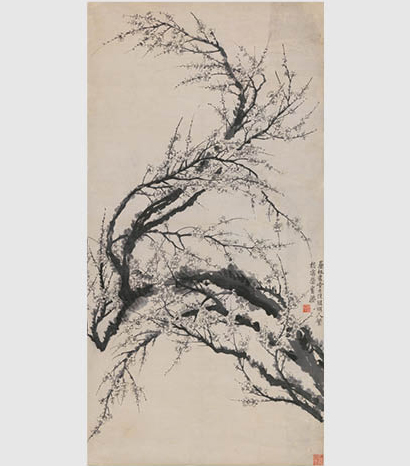 Wang Shishen (1681—1759), courtesy name Jinren, literary name Chaolin and Xidong Waishi, stayed in Yangzhou and sold painting for a living. He was friends with Jin Nong and Hua Yanxiang. He was adept at drawing plum blossoms, writing Bafen (Eight Point, 八分书) script and seal cutting. He was the author of Chaolin Collection of Poems.

The white plum branches stretch into the picture frame from the right, in a “Z” shape, gracefully leaning to this side and that. Plum tree trunk is in dark ink while the moss and flower heads in light ink. The artist’s own inscriptions read, “drawn by Shishen from Chaolin Academy by applying the painting technique of luxuriant foliage in Ming Dynasty”; the seal reads “Jinren Fu” carved in intaglio.

Wang Shishen was one of the Eight Eccentrics of Yangzhou, and his plum blossom paintings were of unique style. Jin Non commented that Wang was good at drawing plum blossoms with luxuriant foliage and flowers, presenting the charm of silver-coated mountains and forests. Zhang Geng also spoke highly of Wang’s ink plum blossoms rendered through proficient brushwork. In this painting, plum branches with a vigorous charm are properly raised up, drooped down, or interlacing with each other. The white plum blossoms are elegant and dense with their circled flower heads outlined, an application of Yang Buzhi’s “drawing a circle to outline plum flowers”, powerfully showcasing the blossoms and stamens.

The chapter “On Birds and Flowers” in Xuanhe Painting Catalogue elaborates the profound meaning of bird-and-flower paintings as the following, “Concerning poetry’s six aspects, namely, Feng, Ya, Song (categories of poetry) and Fu, Bi, Xing (techniques of expressions in poems), most are about birds, animals, grass and trees. Poems record the vicissitudes of birds and flowers as seasons change; similarly, paintings are largely inspired by birds and flowers as well, like poems. Therefore, the grace and luxury of flowers like tree peonies and peonies as well as birds like phoenix and peacocks are exemplified in some paintings, while others convey the gentleness and serenity of egrets and wild geese as well as pines, bamboos, plum blossoms and chrysanthemum…all of these come to life when they are presented on painting papers, through which the painters can express their own emotions and spirits, imaging they are truly in the ideal situation.” This concept later became an inspiration for bird-and-flower painters. Song Lian in Ming Dynasty considered plum blossoms a superior subject to other birds and flowers in painting. “How miserable it is that lofty and proud plum blossoms bloom among other ordinary and vulgar birds and flowers!” He started to believe that drawing “plums rising from the mud” should be seen as a decorous theme in painting when Shi Zhongren created the technique of painting ink plums.

Wang Shishen was a plum blossom lover by nature and particularly indulgent in plum blossom drawing. This painting Plum Blossoms depicts independent and unyielding plums against freezing frost and snow in winter, to reflect the artist’s moral integrity as a lonely but proud person. In the 1980s, Plum Blossoms by Wang Shishen was identified as a National First-Class Collection by calligraphy and painting appraisal seven-member group under the State Council, now displayed in Tsinghua University Art Museum.
Share