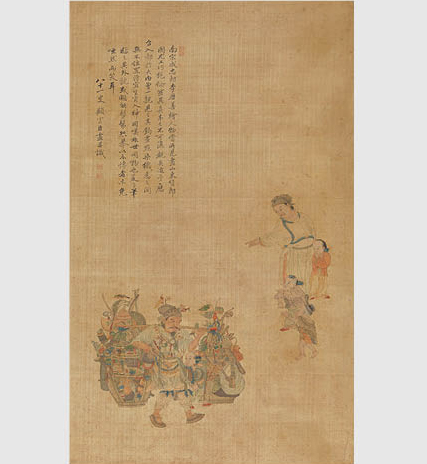 Li Tang, Chengzhonglang (an official position) in Southern Song Dynasty was good at painting figures, and once accomplished an excellent painting of a street vendor in Shandong; however the authentic version of the painting is unavailable now. But when the painting was sent to the court in the capital, I was fortunate enough to see it with my own eyes. The lifelike figures were outlined and rendered in a precisely appropriate manner. As it is such a rare treasure, I started to imitate it. Although my work is, to a large extent, a resemblance of the original, it still might be laughed at by the wise. It was painted and inscribed by 81-year-old Gu Yunchen.

Gu Jianlong (1606—after 1687), courtesy name  Yunchen, literary nameJinmen Huashi, native of Taicang, Jiangsu Province. Another source indicates that he was from Wujiang and lived in Huqiu. In the early period of Emperor Kangxi’s reign, he served at the imperial court as Zhihou (an official rank), the figure portrayer together with Gu Ming, and then got well-known in the capital city. He was once Zeng Jing’s pupil. His figure paintings feature wild strokes and smooth lines of clothes. His Buddha paintings are solemn and magnificent, as exquisite as Qiu Ying’s work. Chen Geng once said, “After seeing Gu Jianlong’s Portrait of Tang Bin, the Duke of Wenzheng, Tang’s sons and nephews all think it is very true to life.” Gu’s figure paintings are exquisite and expressive, highlighting figures’ manner and movements; they also boast powerful strokes, forming a style similar to that of Liang Kai, Dai Jin and Wu Wei. Gu Jianlong was also adept at painting flowers and plumes. In addition, he was proficient in traditional painting techniques, and thus good at imitating predecessors’ works to make the copies look quite genuine.

This is a meticulous figure painting by Gu Jianlong in Qing Dynasty. It is ink and pigment on silk, depicting a street vendor carrying sundry goods to sell, who not only carries them on the shoulder, but also hangs and lays various goods all over his body to attract people’s attention. Wearing straw sandals and puttees, the vendor looks quite realistic and lively. The dazzling goods firstly attract the children. In the painting two kids are running towards the vendor guy; while the other, being a bit shy, is hiding behind an adult. The entire picture is full of dynamism, and meanwhile what the children are thinking and behaving is also incisively and vividly conveyed. The inscriptions indicate that this work, depicting people’s daily life, was finished by Gu upon another painting Street Vendor by Li Song in the Southern Song Dynasty. Delicate fine brushwork is applied to portray the figures in a vivid manner and bright colors. The eye contact between the street vendor and the kids help make the figures come to life even more.

Street Vendor themed paintings, originating from the Northern Song Dynasty and thriving in the Southern Song Dynasty, were often seen in Ming and Qing Dynasties. Scholars see this genre a direct reflection of the flourishing commercial economy, with well-developed politics, booming economy and well-off society all demonstrated through street vendors wandering about the streets, hawking their wares. Some other studies point out that although these paintings reflect ordinary people’s life, they are actually created by the royalty, “for the imperial members to appreciate”; some imperial court utensils are also decorated with paintings of this genre. Historically, Gu respectfully served at the imperial court as Zhihou, the figure portrayer in the early period of Emperor Kangxi’s reign, and then got well-known in the capital city. Hence, the genre of Street Vendor can be seen as a reflection of Gu’s time, when he was living in Kang-Qian Flourishing Age as a court painter.

Gu Jianlong’s Street Vendor presents a realistic and vivid depiction of figures. In the 1980s, it was identified as a National Third-Class Collection by calligraphy and painting appraisal seven-member group under the State Council, now displayed in Tsinghua University Art Museum.