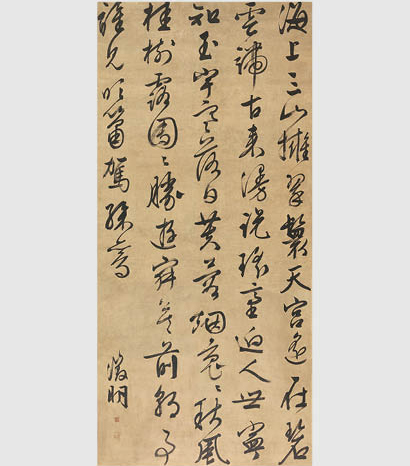 Wen Zhengming’s (1470—1559) original name was Bi; however, his courtesy name had been more widely circulated, and he changed his courtesy name into Zhengzhong, literary name Hengshan. He was from Changzhou (today’s Suzhou, Jiangsu Province). He was not the cleverest in his childhood, but got extraordinarily intelligent later. He studied literature from Wu Kuan, learned calligraphy from Li Yingzhen and painting from Shen Zhou. He attended the imperial examination for times but failed. At the age of 54, he attended the examination held by the Ministry of Official Personnel Affairs as a tribute student, and then served as Daizhao (an official position) in Hanlin Academy. In Tao Zongyi’s (Ming Dynasty) Highlights of Chinese Calligraphy History, it is recorded that “Daizhao’s regular script in small characters, running script and cursive script all manifest excellent brushwork that he learned from Zhi Yong, and he also imitated Fu Weng’s (Huang Tingjian) script in bigger characters, which is as wonderful as flowers dancing in the wind and springs singing in the bamboo groves”. In Fragmented Words of Art by Wang Shizhen in Ming Dynasty, it says, “Wen imitated Wang Xizhi and Wang Xianzhi in writing regular script in small characters, and his fine brushwork is admired except a few sharp strokes; he took a lead to improve his calligraphy. In his teenage time, he learned cursive writing from Huai Su, and regular script from Su Shi, Huang Tingjian, Mi Fu and the writings in Preface of Holy Doctrines. In his later years, he studied merits and shortcomings of Preface of Holy Doctrines, and with his own efforts to improve them, he finally developed his own style of writing”. He created Tingyun Guan Calligraphy Model and was the author of Futian Collection. His biography was included in History of Ming Dynasty.

Over the sea mountains cluster around emerald gree forests,

high in the jade clouds locates the Heavely Palace;

Since ancient times people are wondering about remote Immortal Terrace,

while in the mortal world everyone knows there’s nothing there but coldness;

Against the lotuses in the setting sunlight curls up a wisp of mist,

with the autumn breeze drops of dew slide off cassia tree leaf tips;

Like joyfully glancing over the loneliness in previous dynasities,

In the spring of the fourth year in Jiajing’s reign (1525), Wen Zhengming, 56 years old, served as Daizhao in Hanlin Academy. With friends, he once toured Xi Yuan, the west side of the Forbidden City and was fairly pleased by the beautiful scenery in the royal palace. After he returned, he composed ten poems to praise the charming scenery of the west part of the Forbidden City, with Taiye Lake at the center (today’s Beihai in Beijing).

The Seven-Character Poem in Running Script, named King Wah Island collected in Xi Yuan Poetry, is written on a hanging scroll. Throughout the caligraphy work, the writing style is sophisticated and the structure is quite consummate, with appropirate transitions from character to character. The writing is elegant and beautiful, with balanced skeleton of characters, and a harmonious and calm arstist conception conveyed from this work. Wen Zhengming’s writing style is, to some extent, similar to that of Zhao Mengfu in Yuan Dynasty; Zhao was specialized in writing down full and rounded characters while Wen was more adept at creating characters full of strength. Basing on Zhao’s style, Wen also drew merits from various schools. Wang Shizhen in Ming Dynasty said in Fragmented Words of Art, “(Wen) learned writing regular script from Su Shi, Huang Tingjian, Mi Fu and the writings in Preface of Holy Doctrines. In his later years, he studied merits and shortcomings of Preface of Holy Doctrines, and with his own efforts to improve them, he finally developed his own style of writing”. Apart from the graceful style of Zhao Mengfu, more features of calligraphers in Song Dynasty can be found in this work, including the originality of Huang Tingjian’s writing, the plentifulness of Su Shi’s writing and the straightforwardness of Mi Fu’s writing.

Wen Zhengming wrote ten scrolls of poetry about Xi Yuan. Part of Xi Yuan Poetry now treasured in Shanghai Museum was written in the 32nd year in Jiajing’s reign (1543), when Wen Zhengming was 84 years old. Another part of Xi Yuan Poetry is displayed in National Palace Museum in Beijing, which was written in the 33rd year in Jiajing’s reign (1544), when Wen was 85 years old. The poem is written on scripture paper with black silk column lines. The two writing works look quite similar; compared with the Seven-Character Poem in Running Script herein, these two works are more of Zhao Mengfu’s style, vigorous but graceful.

This calligraphy work was identified in the 1980s as a National Second-Class Collection by calligraphy and painting appraisal seven-member group under the State Council, now displayed in Tsinghua University Art Museum.