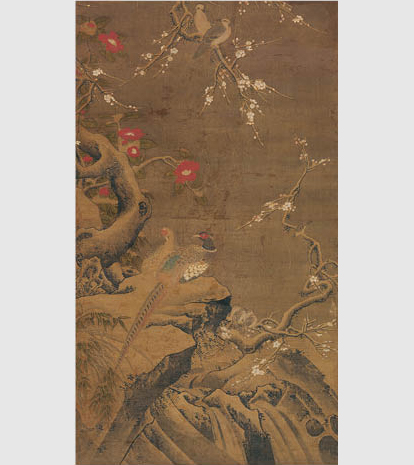 There are no inscriptions and seals for this painting; while it is speculated to be painted by Lv Ji in Ming Dynasty. The painting has bright colors, combining both fine and freehand brushwork, and depicts birds perching in snow. A couple of ring-necked pheasants constitute the main part of the painting. The male pheasant’s prosperous plumes make it look quite dignified and elegant, and it is looking around, imposing but vigilant; its partner behind look demure and calm, preening its own plumes gracefully. The birds are depicted fairly vividly, outlined by fine brushwork and colored quaintly. The two ring-necked pheasants are perching on a raised rock, which is cracked dyed with small axe-cut technique, and the brushwork is quite similar to the style of Ma Yuan and Xia Gui in the Southern Song Dynasty. Two paralleling streams among the miscellaneous stones are presented dynamically by several strokes, adding more pleasure of life to the painting. Old trees and twisted branches in the forest are drawn through cracked dyeing. The white plum blossoms and red camellias compete in beauty and fascination. At the top there are two spotted-neck doves looking at and singing with each other on a plum tree branch. The overall composition is rigorous and the layout appropriate with prominent main parts. Fine and freehand brushwork techniques are both applied. The painting features also bright colors and reasonably arranged density.

Wintry Plum Blossoms and Golden Pheasants by Lv Ji keeps the legacy from both meticulous imperial-court bird-and-flower painting in Song Dynasty and fine brushwork painting by Huang Quan during Five Dynasties. It is mainly accomplished through fine brushwork, supplemented by freehand brushwork, with thick bright colors and precise painting techqnieus. In the 1980s, it was identified as a National First-Class Collection by calligraphy and painting appraisal seven-member group under the State Council, now displayed in Tsinghua University Art Museum.
Share