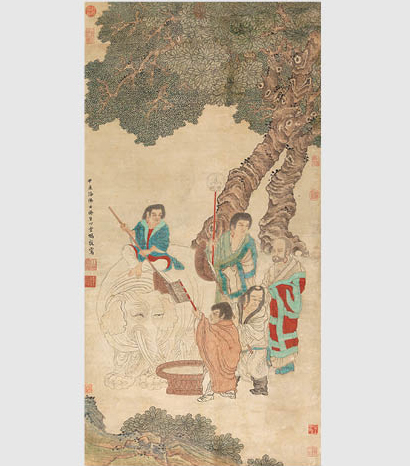 Respectfully created by Buddhist Ding Yunpeng on Birthday of Buddha in Jiachen Year.

Inside inscriptions: The painting Washing Elephant by Ding Nanyu treasured in Shiqu. Treasured in an iron vessel. Inscribed by Hanyun.

Ding Yunpeng (1547-1628), courtesy name Nanyu, literary name Shenghua Jushi, native of Xiuning, Anhui Province. He was adept at painting persons, landscapes and Buddha, and his line drawings could reflect impact from Li Gonglin, featuring meticulous brushwork. Dong Qichang presented Ding a seal, saying “Haosheng Guan (毫生馆)”. Chen Jiru once commented, “Nanyu’s line drawings are exactly like those of Li Longmian. The figures he painted all have their emotions reflected from their subtle expressions, which can only be accomplished by a man who stands out in comprehending people’s motions and manners”. In Fang Xun’s Opinions on Paintings from the Adobe of Mountain Tranquility, he wrote, “Ding elaborated figures in a way similar to Zhang (Sengyao) and Wu (Daozi), with a valiant style of the figures as well as bold and vigorous strokes”. Ding’s works deserve both comments; line drawings in Cheng’s Garden of Ink and Fang’s Guide to Ink were also by Ding Yunpeng.

Ding’s birth year is determined according to Liu Jiuan’s Chronology of Calligraphy and Painting Works Passed Down From Song, Yuan, Ming and Qing Dynasties.

This painting on paper was finished by Ding Yunpeng in Ming dynasty. To the fore in the painting, there is a white elephant outlined in light ink, and three elephant servants are showering the elephant with brooms, along with a great Bodhisattva in red-and-blue kasaya and an arhat with a Buddhist monk's staff. The figures and the white elephant in the painting are all textured and outlined with tremulous brush technique that the artist is good at. The six-ivory elephant is stocky with a harmonious look, similar to the “six-ivory elephant king” that Samantabhadra rides, according to Saddharma Pundarika Sutra (《法华经》). The elephant servants are with prominent noses, deep eyes, drooping mouth and dark hair, looking like northern barbarians in ancient times; the arhat holding a monk’s staff and the Bodhisattva are looking at each other, seeming to be talking. The distant view in the picture is cracked dyed, where there are two lindens growing together, with goiter trunks, twisted branches and luxuriant foliage, forming a visual contrast with those in the foreground while balancing the overall picture.

Washing elephant themed painting is a traditional Chinese painting genre. From paintings of this subject passed down from generation to generation, it could be seen that from Yuan to Ming and Qing Dynasties, the composition of the paintings were already basically settled, mostly with servants sweeping and washing a white elephant. Painting of this subject has been attracting attention due to its origin from Zen Buddhism. The inscriptions in Qian Xuan’s (Yuan Dynasty) painting Manjushri Washing Elephant read, “wash off the dust and see the Buddha of thusness”. According to the interpretation of Zen Buddhism, one should throw off his persistence on appearance (“xiang” in Chinese pinyin) to be a real Buddhist, while the Chinese pronunciation of the word “elephant” (“xiang” in Chinese pinyin) is same with that of “appearance”; in addition, the white elephant is seen as a Buddhist symbol being Samantabhadra’s mount. The great Bodhisattva in the painting is widely deemed to be Samantabhadra, and therefore washing elephant becomes an often seen genre in Buddhist painting. Ding Yunpeng, a devout Buddhist, created a number of paintings of this genre and gained much appreciation in the painting history. The date inscribed in this painting is Year 32 of Wanli in Ming dynasty (1604 AD), a Jiachen Year, when Ding was 57 years old, and therefore this work was finished in his mid-to-late years. In the 1980s, it was identified as a National First-Class Collection by calligraphy and painting appraisal seven-member group under the State Council, now displayed in Tsinghua University Art Museum.
Share