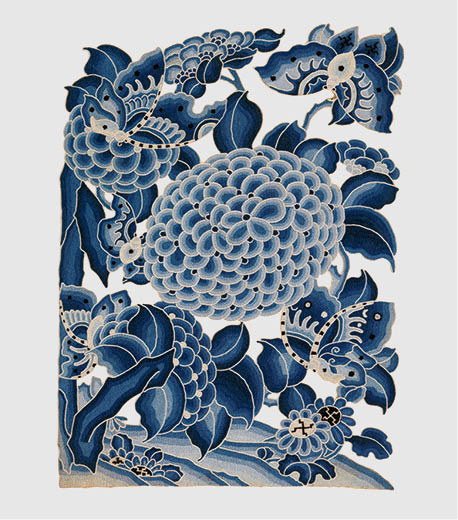 Mamian refers to a piece of rectangular decoration hanging in front of a pleated skirt. This Mamian is weaved in three blue colors, which is invented under the influence of blue-and-white porcelain. Various threads of the same color category, but in dark or light colors, are applied. The three blue color embroidery features harmonious colors and consistent stitch work, thus making it look simple but beautiful. It is widely used in embroidered clothing and daily goods. The main pattern of this Mamian is a hydrangea, which was called “Eight Immortals flower” in ancient times; in the background there is a malus spectabilis (“haitang” in Chinese pinyin), so together the scene depicts “Eight Immortals Crossing the Sea” (sea, “hai” in Chinese pinyin). The legend of Eight Immortals originated in the Southern Song Dynasty, and the image of Li Tieguai (one of the Eight Immortals) already appeared in poetic dramas in Yuan Dynasty. Wu Yuantai in Ming Dynasty compiled Eight Immortals—Journey to the East according to relevant legendary stories when Eight Immortals became stereotyped images. In traditional artistic works, Eight Immortals mostly symbolize birthday congratulations, also known as “Eight Immortals Celebrations”. “Eight Immortals Crossing the Sea” stems from the legend that they cross the East Sea with no boat, each showing his special power, for the Feast of Peaches held by Queen Mother of the West. This piece of Mamian boasts a novel subject, delicate embroidery work, plain but elegant colors and thus a lasting appeal.