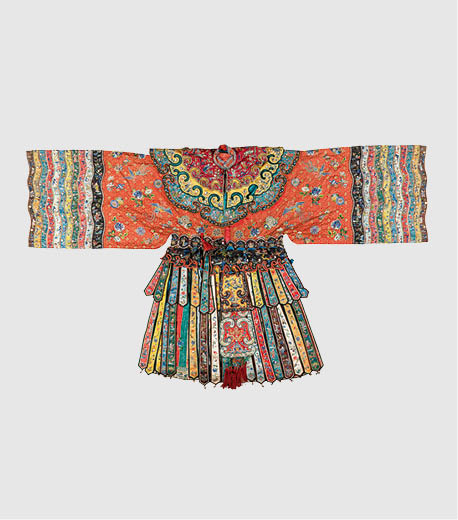 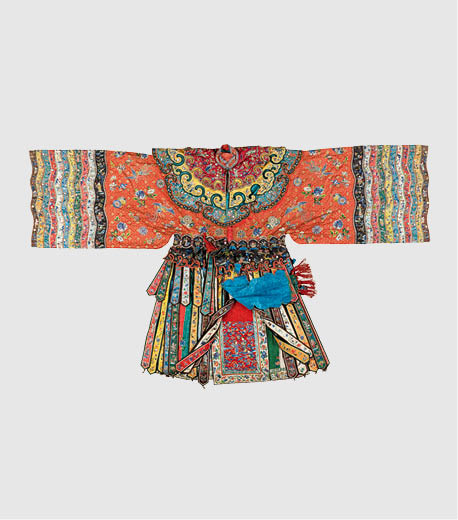 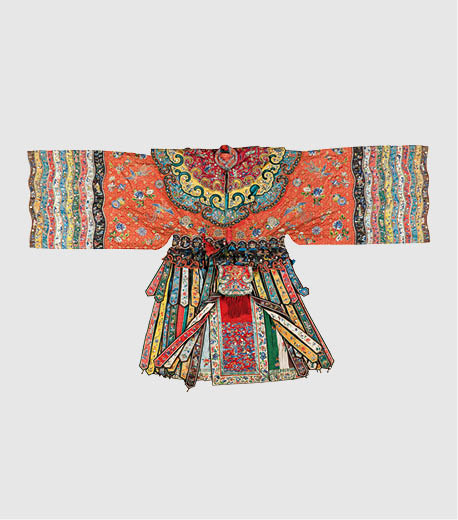 Dancing costumes, or “palace costumes”, are for traditional Chinese opera performance, usually worn by performers who play ladies in the palace, like princesses, highest-ranking imperial concubines and empresses, for instance, Consort Yu Ji in Farewell My Concubine. At the end of Qing Dynasty and throughout the Republic of China era, ordinary people also had their daughters wear this kind of costumes as wedding gowns. This costume has a round collar and a big three-layer cloud shoulder (purple, yellow and green). Each big loose sleeve has 11 colored embroidered laces. It is of front opening style with the front extending to waist. The lower part is a pleated skirt, of which the outer cover is like a “phoenix tail” constituted by two layers (upper and lower) of embroidered ribbons, 82 in total. All decorations are colored embroidered; there are up to 248 embroidered figures of different colors and styles. Above the waist, background patterns “Sihe Ruyi” (literally “things from all four directions will go smoothly”) are embroidered carefully and neatly through gold-wrapped threading on the royal scarlet red satin, to form layers of decorative pattern networks. Then various decorative patterns including peonies, yulan, firmiana simplex, lucid ganoderma and small rounded patterns are stitched against the background patterns. On the three-color cloud shoulder, there are 36 stitched figures in various expressions and forms. The painting “Hundreds of Children” is embroidered on 22 edges of both sleeves. Front and rear qunmen are both composed of two pieces, one above and one below, with colored embroidered landscapes and figures. Small copper bells are attached to the bottom of the “phoenix-tail” ribbons. The overall costume is sewed with round silvery metal discs, diameter 1.3cm. This work is no doubt a masterpiece among colored embroidered costumes.