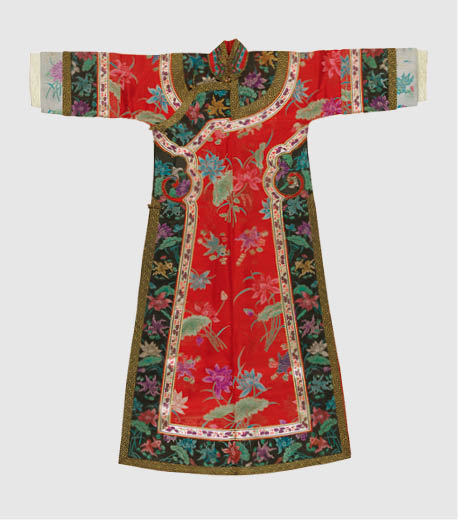 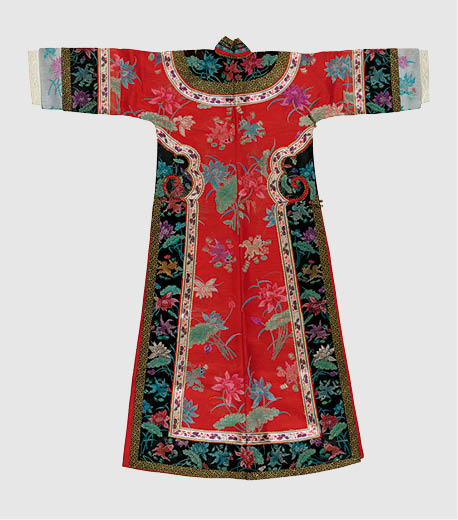 This changyi gown is a gem among all ancient costumes treasured by Tsinghua University. It is made of red and soft silk, on which goldfish and lotuses are embroidered through the technique “yisichuan” (i.e. dotting stitch); “goldfish” and “gold and jade” both pronounce “Jinyu” in Chinese Pinyin, so the embroidered designs are also named “jinyumantang” (meaning gold and jade full of house). “Yisichuan” is a traditional Chinese stitching technique, one of Suzhou yarn embroidery techniques, also named “xieyisi”. Plain yarn is used as the primer, and each stitch is placed in a block in the grid lines formed by the satin grains, like dotting in each block, and together all the stitches constitute the entire embroidered design. The gown has a round stand-up collar with a collar support, right lapel and four buttons and loops. “Set-in sleeves” are connected to “flowery sleeves” and then to “decorative over sleeve”. The big splits on both sides extend up to under arms. The three-layer ornaments on the borders are heavy and thick; the inner layer is white silk lace and on the outside there is a layer of brocade with woven flower patterns with golden threads. The middle layer, also the most important, is cyan yarn on which goldfish and lotuses are embroidered through “yisichuan”, echoing those on the main part of the gown. Overall, colors and design layout of this gown are quite balanced, joyous and ardent, but also dignified and solemn.