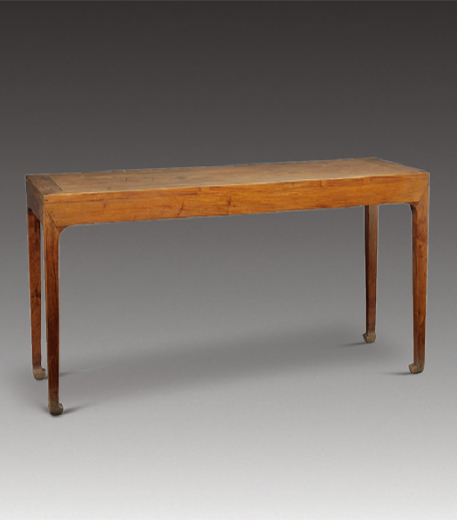 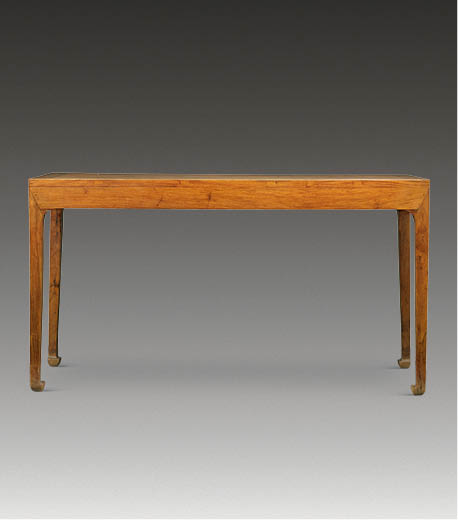 All-side flat long table, or “all-side even long table”, is a classic style among furniture in Ming Dynasty. First, legs are connected to the apron grid to form the skeleton of the table, and then joint to the table panel to strengthen the entire table; the side of the table panel and the aprons are seamlessly fitted together, so as to make the table thick and heavy rather than thin and weak. This form was only seen in furniture made in Ming Dynasty, rather than in those since Qing Dynasty. As studied by Mr. Wang Shixiang, “tall tables with flat four sides were very popular in Song Dynasty, as showed in the painting album Leisure Autumn in Song Dynasty; by Ming Dynasty, various forms and manufacturing methods of these tables emerged.” From prints in Song Dynasty, it is seen that not only tables for Chinese zithers were flat on all sides, but also tables for painting, writing or liquor tables. Among existing all-side flat tables, there are all-side flat giant’s arm brace (extending from the leg to the underside of the table top at a 45° angle) long tables and all-side flat straight stretcher with decorative struts long tables.

This all-side flat Chinese zither table is of the most simple and elegant form among tables in this category, with neither complicated appearance nor intricate ornaments, plain but with a lingering charm. The design is just in the right amount, which can mostly demonstrate features of furniture in Ming Dynasty. Gustav Ecke (1896~1971), a German scholar known for his studies in Chinese furniture in Ming Dynasty, published in 1944 Chinese Domestic Furniture, the world’s first monograph on furniture in Ming Dynasty, in which the table herein was recorded, attached with the delicate and accurate measured drawing finished with the help of Mr. Yang Yao. For over half a century, refined furniture works passed down from Ming Dynasty are treasured across the world; the all-side flat table herein is fairly outstanding among them.