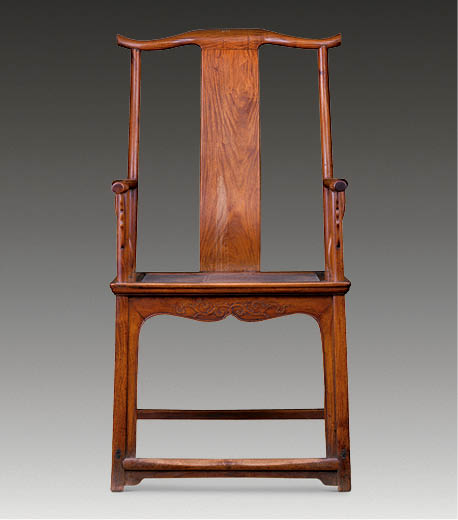 Armchair with four protruding ends is also called northern official’s hat armchair, with quite a mature style and strong Chinese characteristics in all types of Ming and Qing armchairs. They are widely used in both rural and urban areas, in landlords’ and gentries’ houses as well as in the imperial palaces. With the overall structure remaining unchanged, the top rail, arms, back and aprons can vary in different ways from one armchair to another.

High quality huanghuali wood is adopted for this pair of armchairs. The back is made out of a well-textured solid board; due to the natural texture and patterns, it does not need any more modification. This is why we say ancient craftsmen are wise. The middle part of the top rail is wide and flat, like a pillow, and the two ends are slightly cocked, thus making the top rail curvy and smooth. The same design is also seen in the arms and legs, echoing that at the top rail, and this design also contributes to the ingenuity of the armchair herein, of which the quality is finer compared with other existing chairs of the same category.