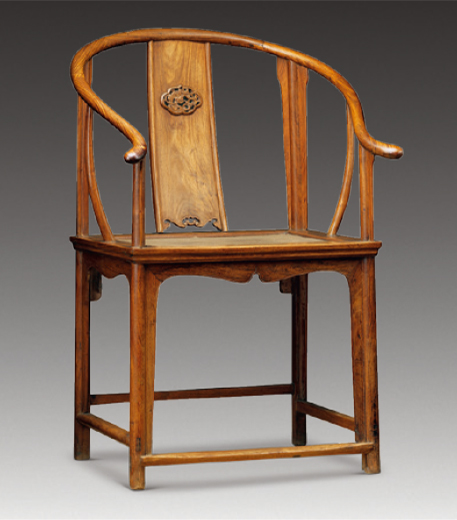 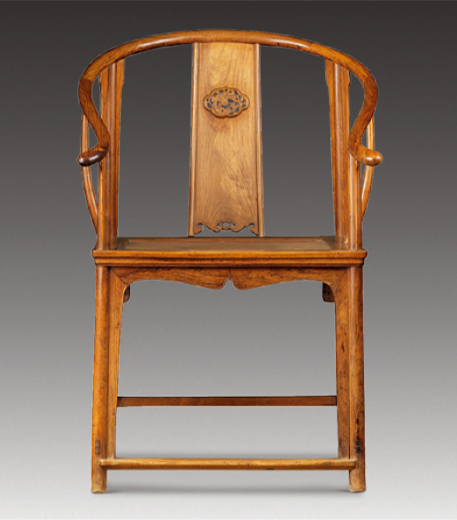 Curved-rest armchairs are named so because of their curved backs. In Song Dynasty they were called “basket backs”, which literary meant big rounded baskets made of wicker and bamboo canes; in Sancai Tuhui in Ming Dynasty, these chairs were named “armchairs with curved rest”.

This huanghuali wood armchair has a curved rest formed of three joint pieces, and the curve is slightly flat. The curved rest, also rounded rest, was called “half-moon armrest” in Zeli in Qing Dynasty, and they could be made with either three or five joint pieces. Three joint pieces have two less mortise and tenon joints than five joint pieces, but they need bigger and longer timbers, and the making of three joint pieces is quite rigorous. This armchair is well proportioned, looking stretched and graceful. For common chairs, the back is generally a solid board, or a mortised-and-tenoned panel with or without carved patterns or inlayed patterns; however, in this case, the making of the back is a combination of the above-mentioned two forms. Grooves are made on posts on both sides of the back, in which a solid board is inlayed, with brightening-the-feet openings at the bottom and a rounded decorative relief at the top. The rounded decorative relief is made in a special way as well; a hole in Ru-yi cloud head shape is made firstly and then a curled-up dragon carving that fits the hole is embedded. This method is very scarcely seen in existing curved-rest armchairs.