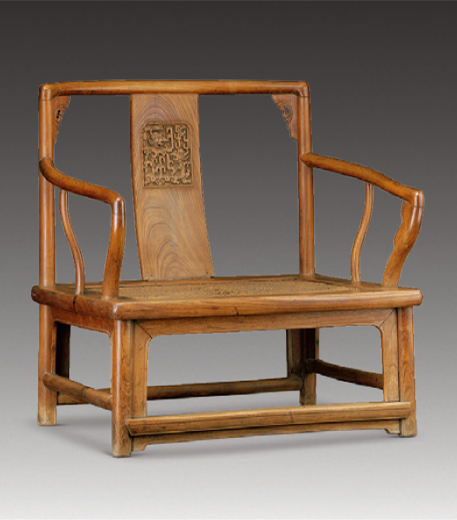 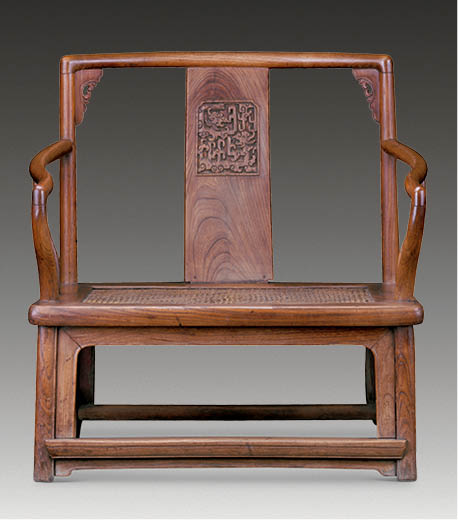 This armchair is of the sole and unique shape and structure among all existing ancient armchairs. The top rail is bent backward significantly, with plant, flower and spandrel patterns carved at the joint between both ends and the rear posts, as well as spandrel patterns at the joint between the arms and front posts. Beneath the seat, there are four straight arch-shaped aprons. The soft mat seat is original and never replaced, with a penetrating transverse brace underneath to support, covered with cinnabar ash. Both arms are bent outward, and the side posts and gooseneck front posts under arms are also bent, to enlarger the space for seating on the one hand, and on the other to show the lines of beauty. The back is decorated with relief carvings on smoothed ground, which can more easily enrich the space within the armchair compared with common rounded carving patterns. The most admirable thing about this armchair is its structure: the seat height is only half of that of common chairs in Ming Dynasty; with a mat on, it looks quite like a piece of modern furniture. Official’s hat armchairs in Ming Dynasty are of ritual significance; as verified by Mr. Wang Shixiang, this chair “might be a Zen chair specifically for cross-legged sitting in temples”, and Zen chairs were gradually being adopted by literati in Ming Dynasty.

Firstly, on behalf of the art college, Mr. Zhang Ding bought this armchair in an antique shop run by a German near East Buya Bridge. Huang Miaozi, who accompanied Zhang Ding during the purchase felt an impulse to keep the chair for himself. As written by Mr. Wang Shixiang in Ming Furniture, “according to craftsmen in Lu Ban Workshop, Drummond Brothers, the American furnisher, used to have the armchair replicated with huanghuali wood in the 1940s, but none of the replicas could compare with the authentic work herein.”