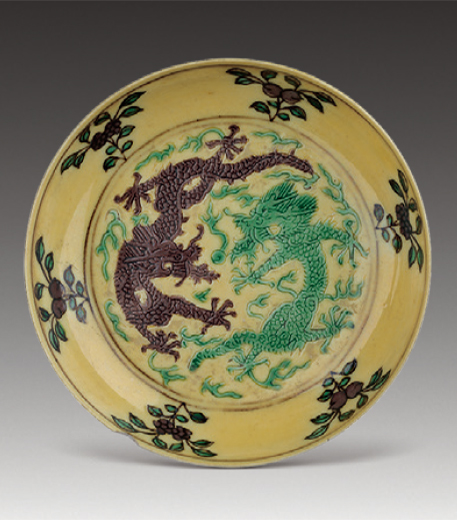 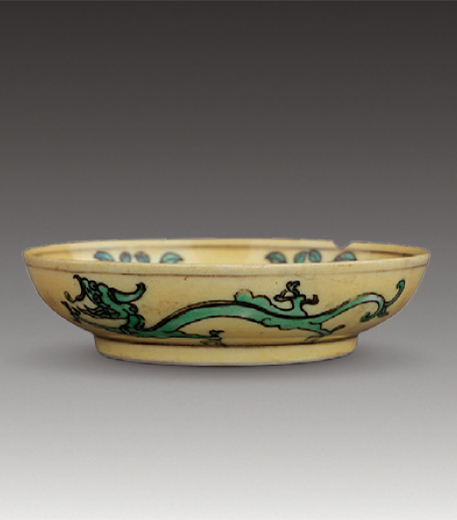 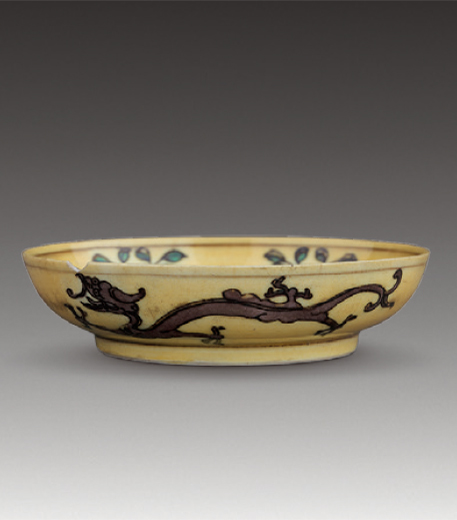 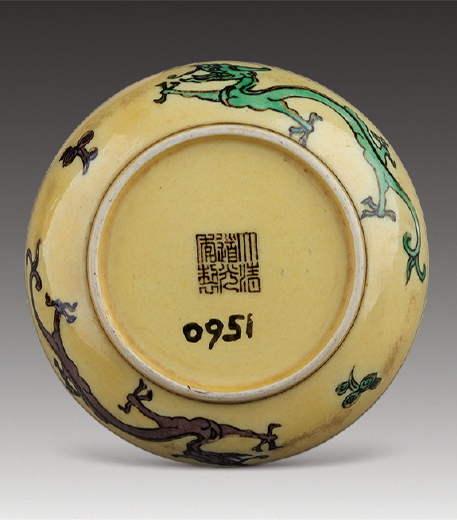 The plate has an open mouth, a shallow arc-shaped body and a rounded base. It is overall yellow glazed in plain tricolor. On the inside bottom is painted the image of double dragons, one purple and the other one green, playing a pearl; in the painting the two dragons are vividly dancing with each other. On the inner wall six flower and fruit patterns are painted, while on the outer wall another pair of purple and green dragons are painted. On the yellow glazed rounded base, a blue-and-white six-character mark in three lines reading “Daqing Daoguang Nianzhi” (made during Daoguang Period in Qing Dynasty) is inscribed in seal script. Against the yellow glaze, the blue-and-white glaze look black and blue.

Manufacturing of plain tricolor wares started during Zhengde Period in Ming Dynasty and thrived in Kangxi Period in Qing Dynasty, with a large number of precious works passed down. Plain tricolor wares are mostly in but not limited to yellow, green and purple; however, red is never used for this category of porcelain. In Ming Dynasty, colored glaze was applied to fill the pre-carved patterns on a plain ceramic embryo fired under high temperature, and then it was processed under low temperature. This was the way of making plain tricolor ceramic works at that time. In Qing Dynasty, new technologies were adopted, with black enamel to outline the patterns instead of carved patterns, which made the painting even more exquisite. Both the Ming and Qing techniques were used to make the yellow glazed plate with double dragon designs herein; the patterns on the inside bottom are carved, looking like bas-relief, and those on the outer wall are outlined.

The shape of and patterns on this plate were up to the official kiln’s standards in Qing Dynasty. During Daoguang Period, plain tricolor porcelains were still being made, though in much less diversified types and shapes compared with Kangxi Period. Among the plain tricolor porcelains that have been passed down until today, most are yellow glazed plates with green dragon designs and phoenix designs.