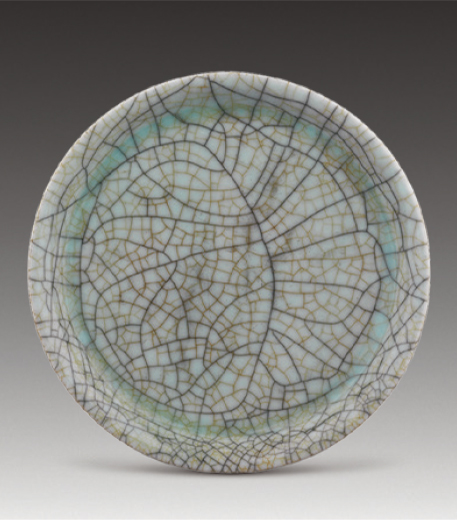 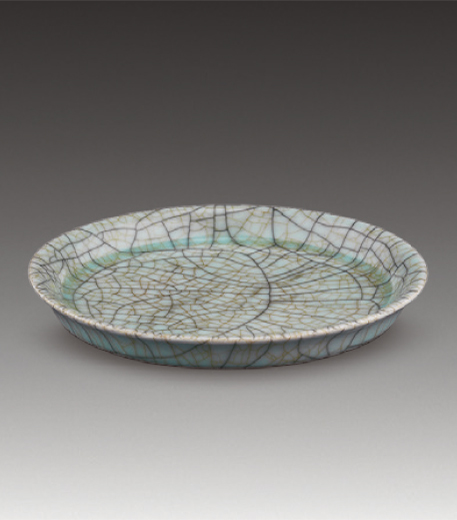 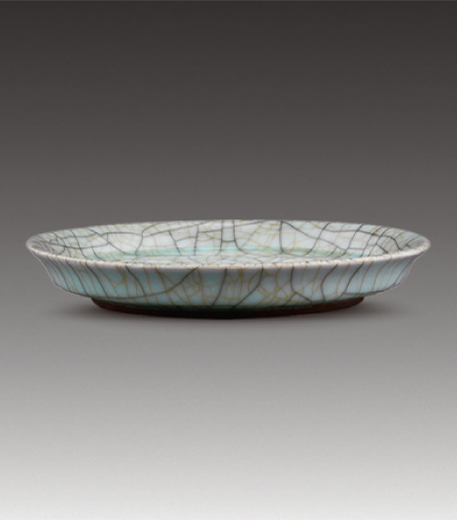 The plate has a wide-open mouth, a shallow arc-shaped body, and at the rounded base the iron brown embryo is exposed. The overall ware is glazed in bluish green, covered with golden floss and iron thread patterns.

“Golden floss and iron thread” is specially to describe the black and yellowish crackles covering the entire ware from Ge-kiln. Bigger crackles are in dark grey like iron, thus called “iron thread”; smaller ones are in yellowish-brown like gold, so they are described as “golden floss”. The crackles are formed after being fired in the kiln, which cannot be manipulated by humans, and therefore each ware is unique with unexpected crackles and patterns. People loved this kind of surprise, and in subsequent dynasties large numbers of wares had been manufactured imitating the Ge-kiln crackled-glazed wares in Song Dynasty.

In Yongzheng and Qianlong Period of Qing Dynasty, great success was made in imitating Ge-kiln wares. In the 6th year under Yongzheng’s reign (1728), Tang Ying, Councilor of Imperial Household Department, was sent to be Director at Jingdezhen (Porcelain capital of China) Imperial Kiln. By the 13th year in Yongzheng’s reign (1735), there were already 57 glazes created through inheriting the classics and inventing the new, and imitated Ge-kiln crackled-glaze was one of them. During Qianlong’s reign, Tang Ying continued to manage the kiln business in Jingdezhen; besides, Emperor Qianlong was fond of the antique style, so various crackled-glazed wares were manufactured during this period. It is worth noting that old wares from Song Dynasty were called “Ge Yao” (Ge-kiln wares), and the imitated wares at that time were named “Ge You” (crackled-glazed wares), which were differentiated from each other. Therefore, the plate herein is called the “crackled-glazed plate”.
Share