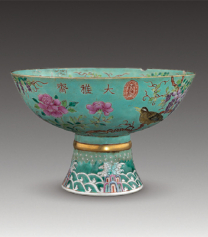 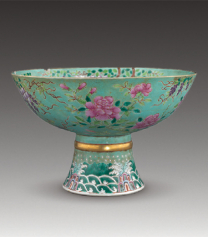 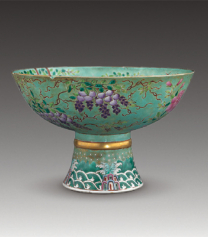 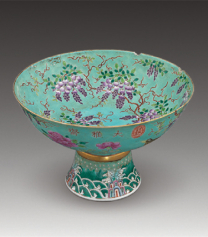 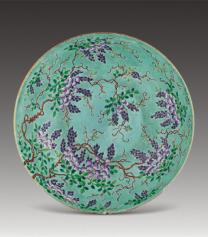 The bowl has an open mouth, an arc-shaped body, and a hollow, high foot turning out at the bottom. The entire bowl is green glazed decorated with powder enamel on the outer wall of the body, on which peony blossoms and a bird perching on a branch are depicted. At the top of the foot there is a bulged circle forming a lap of string patterns in gold; below, reef and waves are painted. Under the mouth rim there is a red-glazed three-character mark “Dayazhai” in regular script and a seal symbolizing “Tiandi Yijia Chun” (a building in the Old Summer Palace) in seal script.

This powder enamel footed bowl with design of birds, flowers and Chinese wisterias is an imperial porcelain work specially manufactured for Empress Dowager Cixi. Dayazhai ceramic works have mainly three inscriptions, namely “Dayazhai”, “Tiandi Yijia Chun” and “Yongqing Changchun”. “Tiandi Yijia Chun” is where Empress Dowager Cixi lived in the Old Summer Palace when she was new in the palace, where “Dayazhai” was one of the rooms. Emperor Xianfeng Emperor also wrote down “Dayazhai” on a horizontal inscribed board as a gift to Cixi. These two inscriptions both meant something special for Cixi. Therefore, when Cixi’s residence in the Old Summer Palace was rebuilt in the 12th year under Tongzhong’s reign (1873), both the building and the wares in it were marked with these two inscriptions.

As recorded in files from the Management Office in the Imperial Palace in Qing Dynasty,  Emperor Tongzhi Emperor issued an edict to manufacture “Dayazhai” porcelains in the 13th year of his reign (1874); by the 1st and the 2nd year of Guangxu’s reign (1876), two batches of “Dayazhai” porcelains were finished, nearly 5,000 pieces in total, in a variety of types. During the turmoil in the late Qing Dynasty and the early Republic of China, a large number of these porcelain wares were lost, and a lot of replicas were made later. Hence, the “Dayazhai” porcelains we can see today still need to be carefully distinguished and identified. The powder enamel footed bowl with bird and flower designs were donated by the Forbidden City (Palace Museum)after the founding of PRC, thus absolutely authentic and a real treasure.