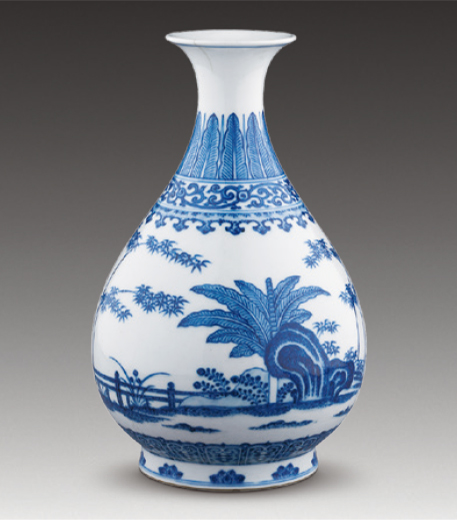 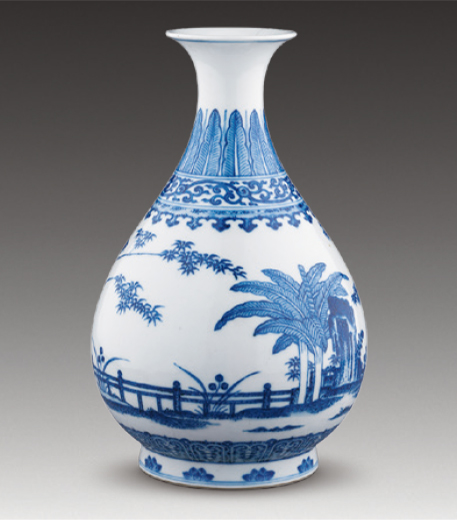 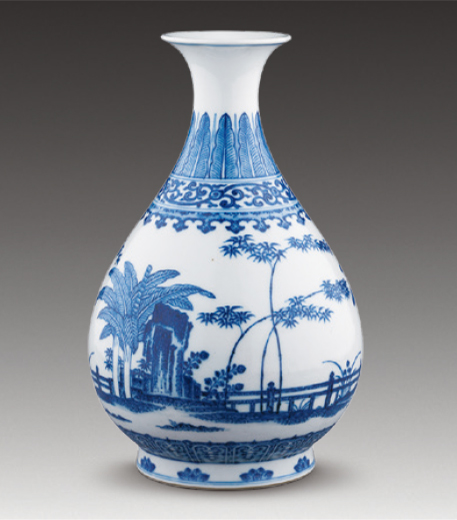 The blue-and-white vase features a flared mouth, a short neck, a drooping body and a rounded base. On the outer surface from above to below along the neck are depicted three layers of ornamental patterns, namely, banana leaves, curly grasses and upside-down Ru-yi (a decorative object symbolizing power and good fortune in Chinese folklore) patterns. Designs like bamboos, stones, banana trees and fences are painted on the vase body, seeming to present the garden scenery. Two sets of lotus petal designs of different forms are depicted circling the base of the vase. A blue-and-white six-character mark in three lines is inscribed on the bottom, reading “Daqing Qianlong Nianzhi (made during Qianlong Period in Qing Dynasty).

Used as a drinking vessel, the Yuhu spring vase originally comes with a lid; however most lids have not been able to pass down through the generations. This type of vase was created in the Northern Song Dynasty, originated from the famous verse “to buy spring (meaning “wine” here) with Yuhu”. This vase design has enjoyed popularity for ages since creation. The Yuhu spring vase herein was made in the official kiln during Qianlong period, when blue-and-white glaze was made of first-class materials from Zhejiang Province, showing a calm and steady color. The short thick vase neck and quite low gravity center at the body make the overall vase look solid and steady.