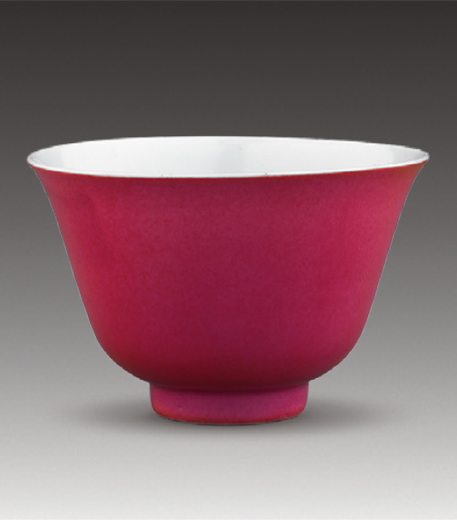 The wide-opening cup has a thin shell, plain and white inside, glazed in rouge red outside, a bright, full and exquisite color. On the bottom of the vase a blue-and-white four-character mark in double lines is inscribed in regular script, reading “Kangxi Nianzhi (made during Kangxi Period), within a double-border square of the same color.

Press-hand cup can be dated back to Ming Dynasty. It has a flared mouth. The vase’s wall is quite thin at the top, then getting thicker and finally considerably thick at the bottom. When someone holds it, its flared mouth rim presses on one’s hand, exactly the part between one’s thumb and index finger, fitting perfectly with the hand shape. Therefore, in Ming and Qing Dynasties, this type of cups gained much popularity. Its glazing color is fairly distinctive; rouge red glaze is a kind of low-temperature color glaze applying gold as colorant, which was imported to China from Western countries during Kangxi Period. The making of this type of cups can be quite tedious; the glaze should be fired twice in kiln, mixed with 0.02% of gold, making it specifically precious. Hence, utensils glazed in rouge red were all made by the official kiln. In addition, this glaze color was created in Kangxi period, thrived in Yongzheng Period, and by Qianlong Period, it started to decline; during subsequent Jiaqing Period and Daoguang Period, the production of rouge red glaze was already not able to compare with that in previous periods in both quality and quantity. Therefore, we say it is an excellent color glaze during the most flourish age in Qing Dynasty.