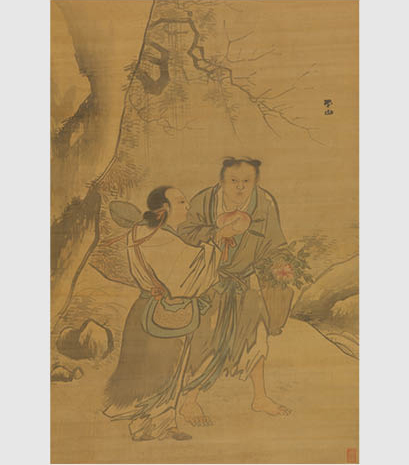 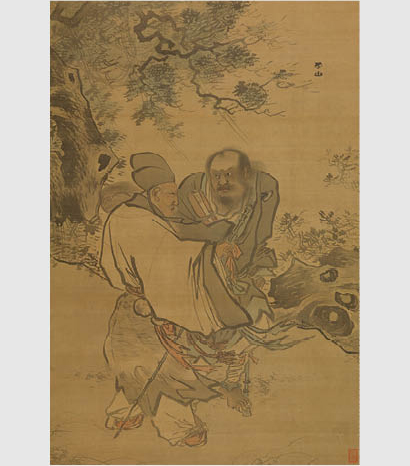 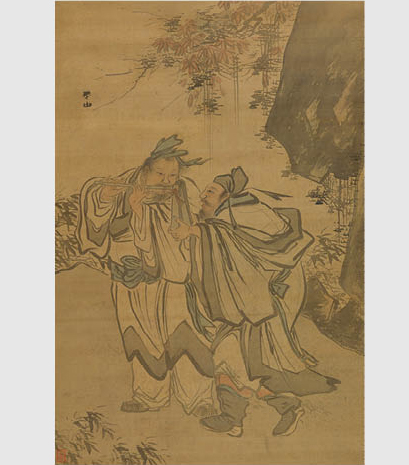 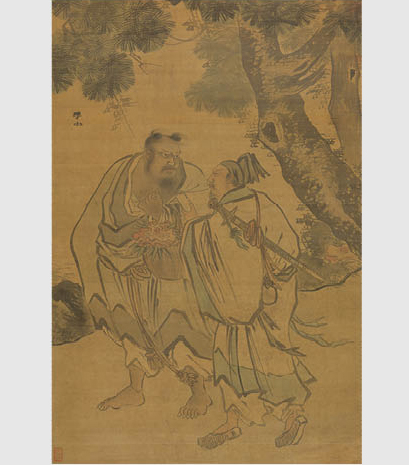 None from the artist

Seal of painting and calligraphy treasured in Qingpingge (青萍阁) (carved in relief).

Zhang Lu (1464—1538), courtesy name Tianchi, literary name  Pingshan, native of Kaifeng, Henan Province. As an Imperial College student, he did not embark on an official career; instead, he was enchanted by painting. He imitated Wu Wei in figure paintings, featuring wild and hasty strokes. Learning from Dai Jin, Zhang Lu’s traditional landscape painting was tinged with a straightforward style. He was also adept at drawing birds, animals and flowers.

The Eight Immortals by Zhang Lu

This is a figure painting on a four-piece screen named The Eight Immortals by Zhang Lu in Ming Dynasty. The Eight Immortals refer to the eight supernatural beings in Taoist legends. In this work, they are painted on a four-piece screen, couple on each piece, where Han Zhongli and Lü Dongbin are on the first piece, Lan Caihe and He Xiangu the second, Han Xiangzi and Cao Guojiu the third, and Zhang Guolao and Li Tieguai the fourth. For different figures and parts, the style of painting varies. Fine brushwork is used to outline the persons’ faces with smooth lines; clothes are painted freehand, but in a resolute and steadfast manner, presenting vigorous touches and fascinating strokes; immortals’ gowns and robes are quickly drawn in simple and quaint colors as well as flexible and diversified strokes. Each figure is showing his/her unique wonderfulness vividly. The robust and strong strange hillstones against the eight immortals are presented applying the painting technique of large axe-cut strokes in the Southern Song Dynasty. The rest of the painting is vivified by old trees, twisted branches, sere vines and bamboo leaves.

Overthrowing the imperial-court painting style in the Southern Song Dynasty characterized by the rigorous and structured set pattern, Zhang Lu chose to paint boldly and convincingly. The subsequent generations admire his paintings as “a powerful expression overflowing from strong axe-cut strokes”. He inherited the Zhe School of painting revitalized from the royal style to the civil style. Though more often criticized neither intellectual elegant nor imperial-court glorious, his works deliver a modern style underlined by its moving appealing presentation and sophisticated vigorous technique. Zhang Lu never inscribed any dates or comments on his paintings, but a fact could still be learned from his style that his works were more dexterous in the early period, and more bold and unconstrained later.

The Eight Immortals (four-piece screen) by Zhang Lu features an extensive painting style with figures depicted in a realistic and vivid way. In the 1980s, it was identified as a National First-Class Collection by calligraphy and painting appraisal seven-member group under the State Council, now displayed in Tsinghua University Art Museum.
Share