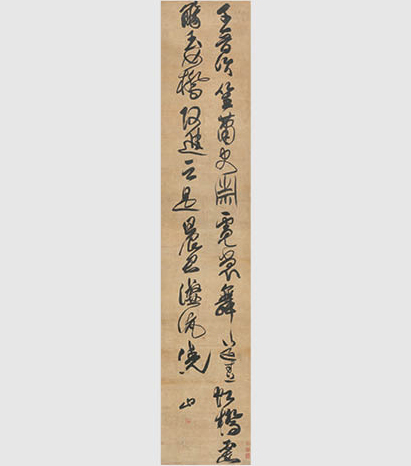 Those wearing rainbow-colored dresses are dancing on Bridge Hongqiao;

Fairies with evening glow cups appear at the end of the bridge,

Soaked in night dews, enveloped in the morning cloud and fog.

Artist’s profile: Fu Shan (1606—1684), original name Dingchen, original courtesy name Qingzhu (青竹), later name Shan and later courtesy name Qingzhu (青主), native of Yangqu (today’s Taiyuan) Shanxi Province. After the downfall of Ming Dyansty, he lived in a mud house wearing vermillion clothes and drinking bitter wine. He was put into prison for being involved in anti-Qing uprisings and was finally rescued through multiple efforts and survived. Fu refused to be summoned by threatening with death in the 18th year in Kangxi’s reign (1679) when the imperial court set up Boxue Hongci Section. Therefore he was allowed to return home and was appointed to be “Zhongshu Sheren” (ancient official title). But he refused again on the excuse of serious illness. Fu Shan was an important scholar at the end of Ming and beginning of Qing Dynasty. Fu was proficient in poem writing and painting, and knowledgeable in history and Buddhist studies. He was the author of twelve volumes of Shuanghongkan Collection and Commentary of Xuncius’ Works. In addition, Fu was a medicine master, especially adept at gynecology, and he wrote Fu Qingzhu’s Obstetrics and Gynecology. Fu Shan was most well-known for his achievements in calligraphy, being outstandingly skilled in regular, seal and clerical scripts, and cursive script in particular.

Fu Shan learned to write calligraphy since he was little, starting from regular scripts in Jin and Tang Dynasties by imitating a large number of calligraphy models of these two dynasties. However, Fu Shan was not someone who stuck to convention and followed predecessors blindly, so his imitations were not very similar to the original versions. Like the majority of contemporary calligraphers, Fu also imitated models like Chunhua Pavilion Model but finally he chose to express his own feelings in his own works. In his late years, he only kept the general idea of the original in his imitated works without modeling in details.

Fu Shan was also known for his unyielding integrity. His disgust of servility was reflected in his calligraphy works. “How is calligraphy related to personnel affairs? Both hate the most to be servile.” Further, he declared that a calligrapher “should be clumsy and unadorned rather than clever and cunning, as well as fragmented and sincere rather than frivolous and deliberate”. Therefore, Fu Shan’s calligraphy featured absence of conventional techniques and focused more on individual expressions, taking this spirit to acme.

Fu Shan enjoyed the highest reputation in his wild cursive writing. The seven-character quatrain in cursive script herein is one of his masterpieces, characterized by unbridled and generous writing throughout the work; from each stroke to the overall layut, it is never restricted by any convention, but of a magnificent and free style. His adaptable desire to create and uninhibited personality are both exemplified in the wild strokes in this piece of calligraphy work. In the 1980s, it was identified as a National Second-Class Collection by calligraphy and painting appraisal seven-member group under the State Council, now displayed in Tsinghua University Art Museum.